We decided to look into Open House to see what happens since students don’t attend. Please join us for this report with interviews with teachers and parents.

Reported and Produced by: Margaret, Liam, and Ollie

Mrs. Barnes was one of the three co-chairs of this annual event, she explained why she volunteered for this event,

“I love … seeing [my] son, and his friends and all of the other wonderful kids, warms my heart. I also love children’s books and love the idea that this event helps grow our amazing library!”

“I love being a part of the ‘Books from the Heart’ event because the event helps to get hundreds of new books into the students hands within a couple of weeks. Mrs. Chase works hard selecting these books …. Reading is so cool because it can be informative and entertaining. Our well stocked library is one of the things that makes Chickering a great school and this event supports the whole community. It’s also really fun to be in the school watching everyone looking through the books and choosing just the right one to dedicate to a special person at the school. I love that the books get to the students who donated them in time for Read Your Heart Out Day *. It’s a great conclusion to the event and very rewarding to see the students excitement about the new books.”

“I have volunteered for this event for the past several years for many reasons. Most importantly, the ‘Books from the Heart’ program involves students and their parents in stocking our library with a wonderful selection of books. I love to read and hope my children, …, grow to have a lifelong love of books too. Their older brother, …, is in middle school now and still talks about the library and Mrs. Chase. [He] reads braille because he is visually impaired and Mrs. Chase always made sure there was a selection of braille books at the school for him. And, now, [our daughter] can take out the braille books for him to read to her. Isn’t that cool? The library at Chickering and all that it has to offer helps make my children excited about books so I love being part of a program that helps Mrs. Chase keep the inventory fresh with lots of books for the students to choose. I also like having the opportunity to be in the school for a few days, with students and teachers walking through the lobby and chatting with them, as they select their books and think about whom they will dedicate it [to]. It’s fun to get to know some of the kids and teachers a bit and to be a part of the Chickering community!” 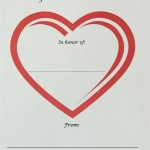 In every book chosen for a special person is a label with a heart. This shows who it was dedicated to, and who it was from. Once these books are placed into the library people can easily identify a ‘Book from the Heart’ book.

Everyone in Chickering School loves purchasing books for the one or two special teachers who have taught them. ‘Books from the Heart’ has been running for more than 16 years! PTO shows their appreciation for the school library by bringing this program back every year. Each kid in Chickering will be able to see their books, which they have dedicated to the teachers, for the school library, for many years to come. Clearly you can see ‘Books from the Heart’ is loved by everyone.

* Read Your Heart Out Day [RYHOD] is always the Friday before February vacation. Everyone in the whole school wears PJ’s and bring their favorite books and reads for almost the whole day. Reading is the highlight of RYHOD and this is a great opportunity to catch up on books.

Reported by Andrew, Andy, and Alia

Did you know that Chickering Elementary School has been running the program known as Fit & Lit for eleven years? Fit & Lit encourages kids to read and exercise more by rewarding every log filled out with a new charm for their necklace. Each student receives a necklace in kindergarten. Some fifth graders have up to 100 charms!

This year, at the kick-off Fit and Lit assembly, it was announced that there would be two teams. Team 1 consisted of grades 1, 3, and 5. Team 2 was Pre-K, K, 2nd grade and 4th grade. Instead of having the teams travel from the Earth to the moon, the teams were asked to circumnavigate the Earth. However, the school also had fun at the assembly because of the fit and the lit they did there. Based on a video, 4th and 5th graders led a version of Watch Me (Whip/Nae Nae) with incorporated exercises. Some other students also read silly poems to the school.

We created a survey for 3rd, 4th and 5th graders wondering what their opinions were about Fit and Lit. 35% responded. When asked if they participated in this event, a large quantity of the 35% said yes, most of which included that they like it because they received charms. 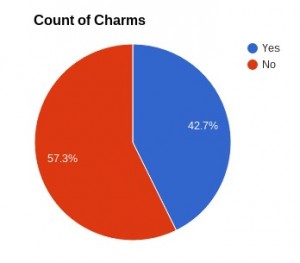 However, when interviewed about their suggestions for Fit and Lit, many said that the teams were not fair, and that charms need to be easier to obtain. We also inquired if they liked Fit and Lit, and the majority said yes, but a surprisingly large number said “50/50”.

Along with a student survey, we also formed a questionnaire for the teachers, staff and administration asking similar questions. 52% responded. Surprisingly, every single responder liked Fit and Lit, although not everyone participated. One teacher shared,

“It encourages the school to work together as a team towards a shared goal. I also believe that we should value exercising our bodies and our minds. It makes everyone focus on remembering to read and exercise.”

Nevertheless, they had many suggestions, including some that would help kids. Such as, “Make it more motivating for the fifth graders” and “Reduce the amount of minutes to earn  charms for many children it takes two or more weeks to earn a charm”.

Although the purpose of Fit and Lit was to read and exercise, there was still a little competition between the teams. Team 1 ended up with 29.4 times around the Earth, and Team 2 finished with 29.1. It was a close race, but Team 1 secured victory.

There was an even more competitive atmosphere throughout the fifth grade, though. Whichever class in fifth grade ended up with the most minutes at the end of Fit and Lit got to play a kickball game against the staff team. Finally, when this fun Chickering tradition concluded, Mrs. Chiavarini’s class ended up victorious in the fifth grade competition.

After looking at every opinion from our surveys, it was clear that almost every interviewee loved Fit and Lit, and made it known that this Chickering custom is fun for all. Even though we did not have a concluding assembly to announce the winners, there was an exciting celebration to wrap Fit and Lit up – the annual Read Your Heart Out Day! After donning their pajamas and snuggling in fluffy blankets with soft stuffed animals, every student in the school set off on a fun reading mission. So from beginning to end, Fit and Lit was certainly a success!

"Pursuant to state law, no expression made by students in the exercise of such rights shall be deemed to be an expression of school policy and no
school officials shall be held responsible in any civil or criminal action for any expression made or published by the students."
Student Publications - adopted: 22 May 2012 (File:JICE)